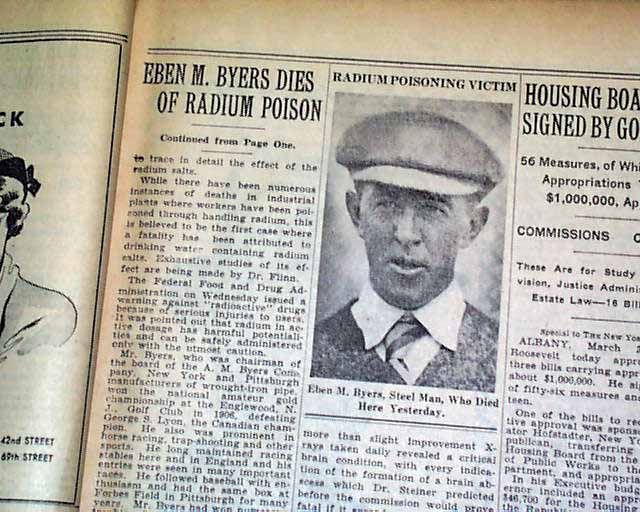 If someone told you that drinking Radium infused water would cure more than 150 ailments, would you drink it? That is exactly what happened in the 1920’s to a wealthy socialite named Eben Byers. After suffering a broken arm that refused to heal, upon his doctor’s recommendation Byers started drinking RadiThor, a radioactive elixir billed as “pure sunshine in a bottle.” He found it so “invigorating” he drank up to three bottles a day. This went on for several years and he consumed nearly 1,500 bottles of RadiThor. Byers loved the stuff so much he even gifted cases of it to friends and colleagues, which lead to the demise of at least one of his lady friends.

Byers began suffering weight loss, aches and pains, headaches, and jaw pain. However, it wasn’t until his bones started breaking and his teeth started falling out that he realized he was suffering from something more serious than his doctors originally thought. After a radiologist who was knowledgeable with another Radium case looked at an x-ray of his jaw, the diagnosis was made, Radium poisoning.

Because Radium is chemically similar to calcium, it accumulates in the bones where the radiation it gives off destroys the surrounding bone marrow, blood cells, and other tissue, essentially boring holes in and disintegrating the bone. As symptoms take years to show themselves, Byers (and others who had jumped on the Radium bandwagon) had already consumed more than three times the lethal dose before anyone knew what was happening.

Due to his social status, his case is one of the most famous but it wasn’t the first or the last. If a positive side to this story is to be had, it’s that because of Byers RadiThor was pulled from the market and public and government awareness was finally brought to the dangers of consuming Radium internally.